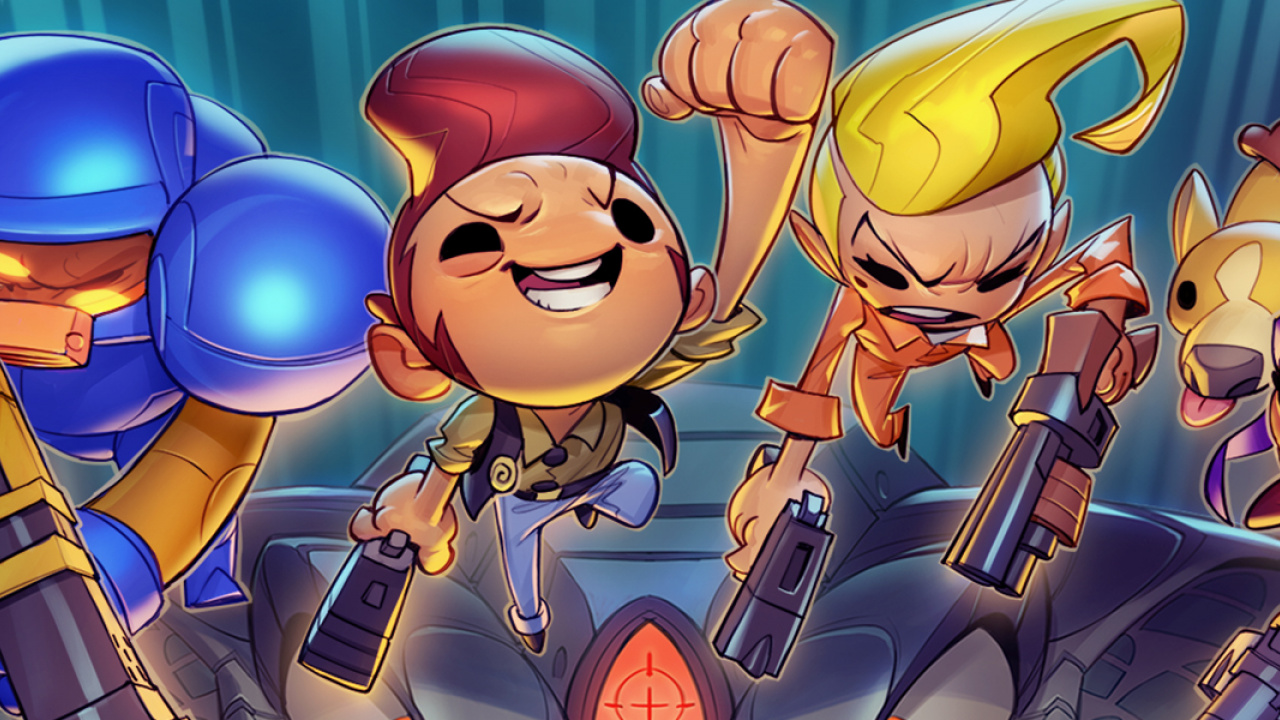 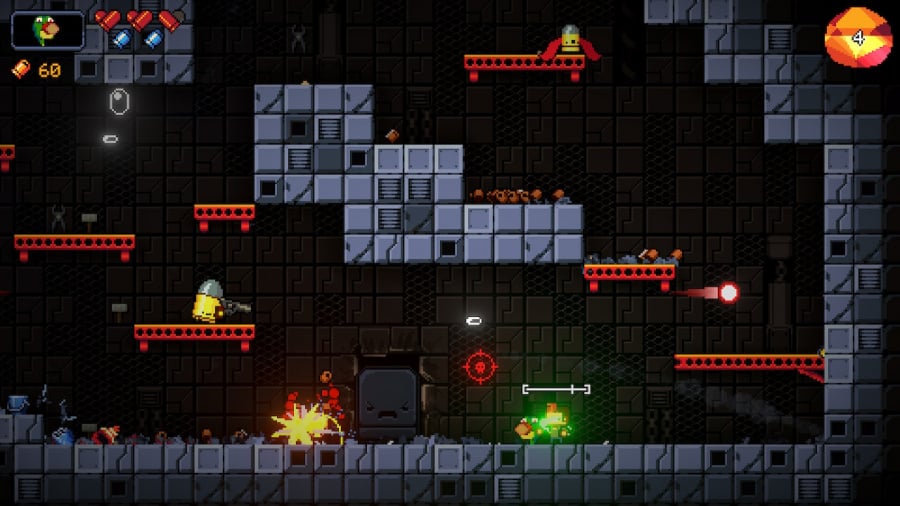 Having created one of the finest indie roguelikes of recent years in Enter The Gungeon, some might have wondered how developer Dodge Roll would follow it up. The answer, of course, is to Exit The Gungeon.

This is no direct sequel, but rather more of an extended epilogue. Having faced and killed their past, our four selectable Gungeoneer heroes must ascend from the depths of the titular dungeon before the whole supernatural edifice collapses in on itself. This is achieved not through more of the same top-down shooting, but via a succession of short, sharp 2D action-platformer arena challenges. Vlambeer’s Super Crate Box is a clear influence here.

Having launched initially on Apple Arcade for iOS devices, Exit The Gungeon is quite naturally a more compact and simplified proposition than its predecessor. It was designed to be playable on a touchscreen, although even at launch this was a way better game with a physical controller attached. As such, Exit The Dungeon feels beautifully at home on Switch – barring a few performance hitches in docked mode, which will hopefully be patched out in time. 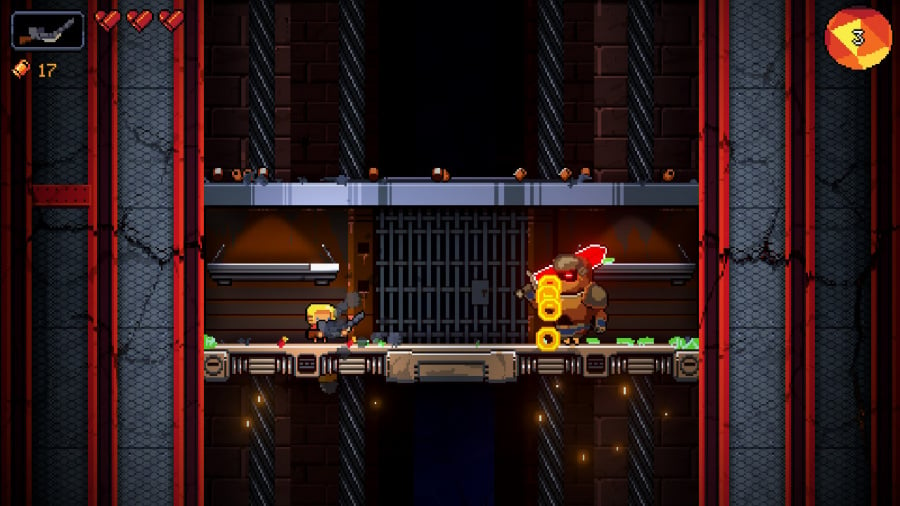 As you start your ascent in a creaky elevator, familiar-looking enemies start to spawn in around you. In case you missed the first game, though, there’s a whole gun theme thing going on in the Gungeon world, so you can expect to face off against boggle-eyed bullets and scampering grenades. With the primary setting being an elevator, the game’s playing areas tend to be incredibly cramped, requiring quick jumps and dodges between a mere handful of platforms – all whilst returning fire with an assortment of the series’ zany firearms.

These guns, which you can steadily unlock in between runs, will be doled out at random by the gun god Kaliber while you play. You might be bossing things with a meaty shotgun one minute, and firing chocks of wood from an arboreal gun the next. The more enemies you slay consecutively, the better the chance is that your next gun will be a good one. This random element is a bit of a double-edged sword, keeping you on your toes on the one hand and stripping away a layer of strategy and player agency on the other.

When it comes to the controls, the left Joy-Con stick moves your character, while the right stick aims your weapon. R and ZR will fire your weapon and detonate your limited bullet-zapping ‘blanks’ respectively, while you can either go with B and A or ZL and L to handle dodge rolling and jumping. Though it might run contrary to decades of Mario-training, we actually preferred to use the latter method, as it meant that we never had to take our thumb off the right stick. 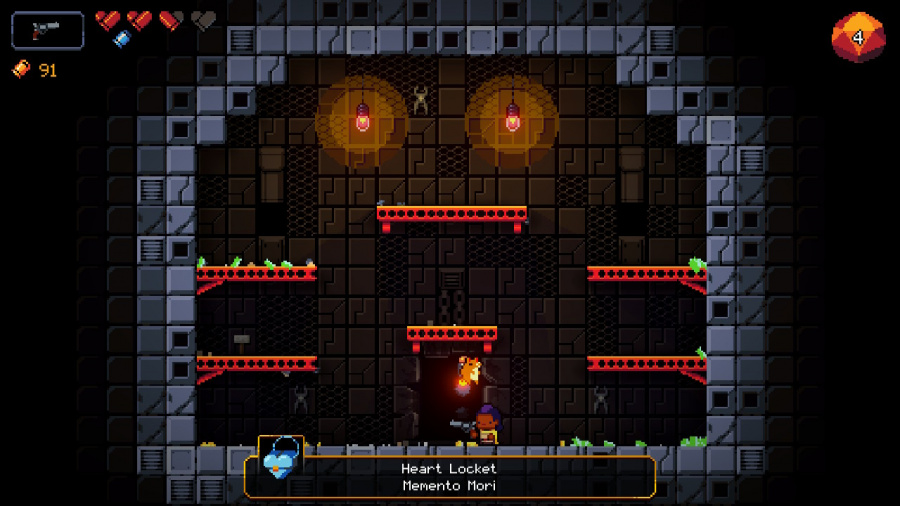 While this is a much-simplified game compared to Enter The Gungeon, the moment-to-moment action somehow feels more convoluted and less instinctive. Enter the Gungeon’s mechanical brilliance centred on its dodge roll, which enabled you to escape a wall of flaming death with a single well-timed button press. In Exit The Gungeon, you effectively now have two dodge buttons to worry about – the dodge roll and the vertical dodge roll (aka the jump).

It’s not always immediately apparent which of these will serve you best against enemies with attack patterns that were bred and honed in a top-down shooter. Not in that vital split second before conscious thought, where many of your manoeuvres will be executed. Thanks to the presence of multiple levels and the effects of gravity, it’s not always easy to calculate where a ‘vertical dodge roll’ will leave you. This is something that will improve with time and practice, but don’t be under any illusion that the game’s smartphone origins will mean an easier ride for Gungeon fans. It’s seriously tough. 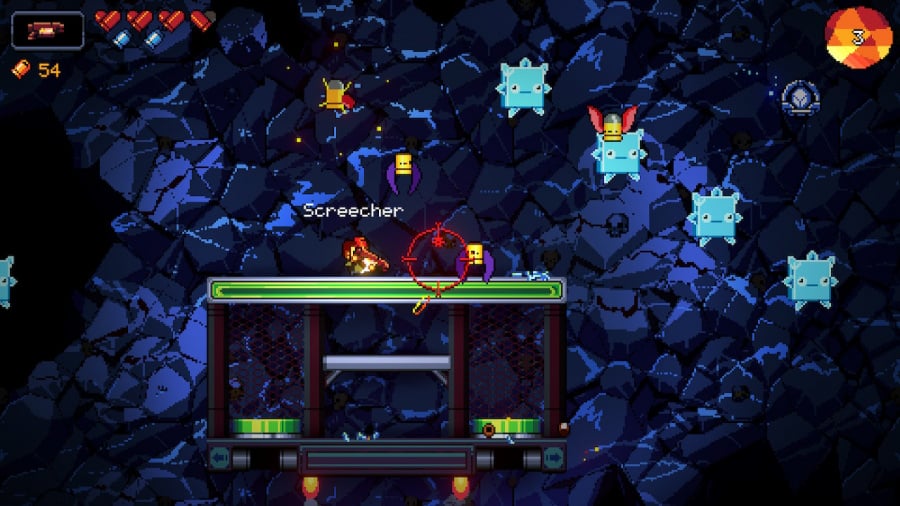 While the Gungeoneers aren’t as clearly differentiated as they were in the original game, they do each follow a different run of levels. After the shared first level, you might find yourself in a steerable elevator with the Pilot or a series of static rooms that can be cleared in any order with the Marine, to name just two of the four possibilities.

One of the great things about Enter The Gungeon was the sensation of limitless discovery. There always seemed to be something new to uncover – an inspired new weapon, a groan-inducing gun pun, an exotic item, a hidden character to rescue, a special area to stumble across. Exit The Gungeon has its secrets, but it’s a much more focused and funnelled experience with seemingly less scope for surprise. That’s doubtless also down to the inevitable feeling of familiarity that comes from sharing so many assets with the first Gungeon game. These are largely the same guns, items, and enemies as before, albeit applied to a world that’s less ripe for experimentation. 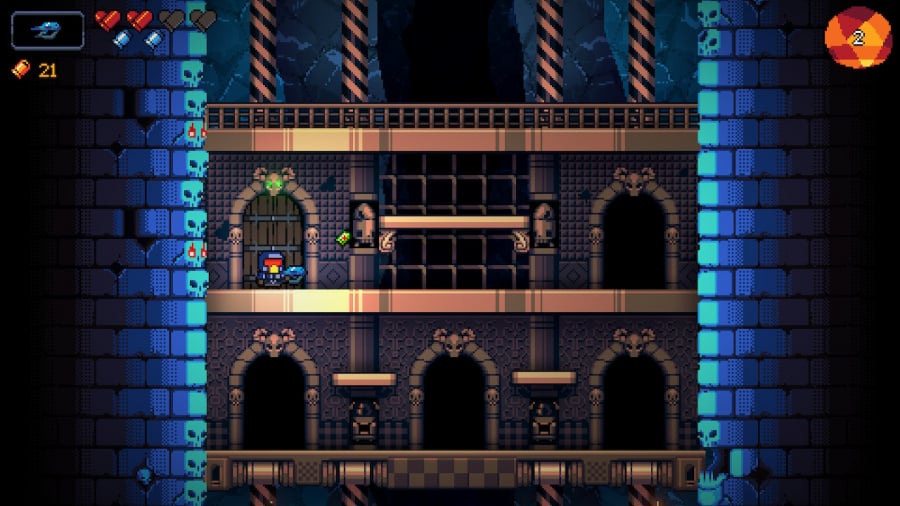 Exit The Gungeon is a polished, fun, and punishing action-platformer that will delight those looking for a stiff indie challenge. However, it undeniably lacks Enter The Gungeon’s freewheeling imagination and tantalising sense of adventure. There’s only a couple of pounds (or dollars) difference between the two on the eShop, but the difference in depth and nuance is much larger.

That said, they’re sufficiently different that it’s not such a straight-ahead ‘better or worse’ proposition. Exit The Gungeon’s snappier, more structured bite-sized levels are better suited to mobile play, as they demand less of your time and attention – if not your skill. As such, while its familiar world and shared elements make for a fine addendum to Enter The Gungeon, it’s also a worthwhile stand-alone game for hardcore arcade-platformer fans.

Enter The Gungeon die-hards will be instantly familiar with the weird and wonderful world presented by Exit The Gungeon, but they might be taken aback by the shift in gameplay. This is a finely honed action-platformer that adds a new dimension to the blasting and dodge rolling. It’s not always a flawless transition, and this is a significantly less rich and rewarding experience than the original. But those after a retro-tinged arcade challenge should by all means lock and load.